The store will not work correctly in the case when cookies are disabled.
Due to increased order volume and the impact of COVID-19, order fulfillment may be delayed. Please allow 3 – 5 days for in stock items to ship. We apologize for any inconvenience.
🔥 TeraFlex Adventure Sale! 10% off on select products. 🔥 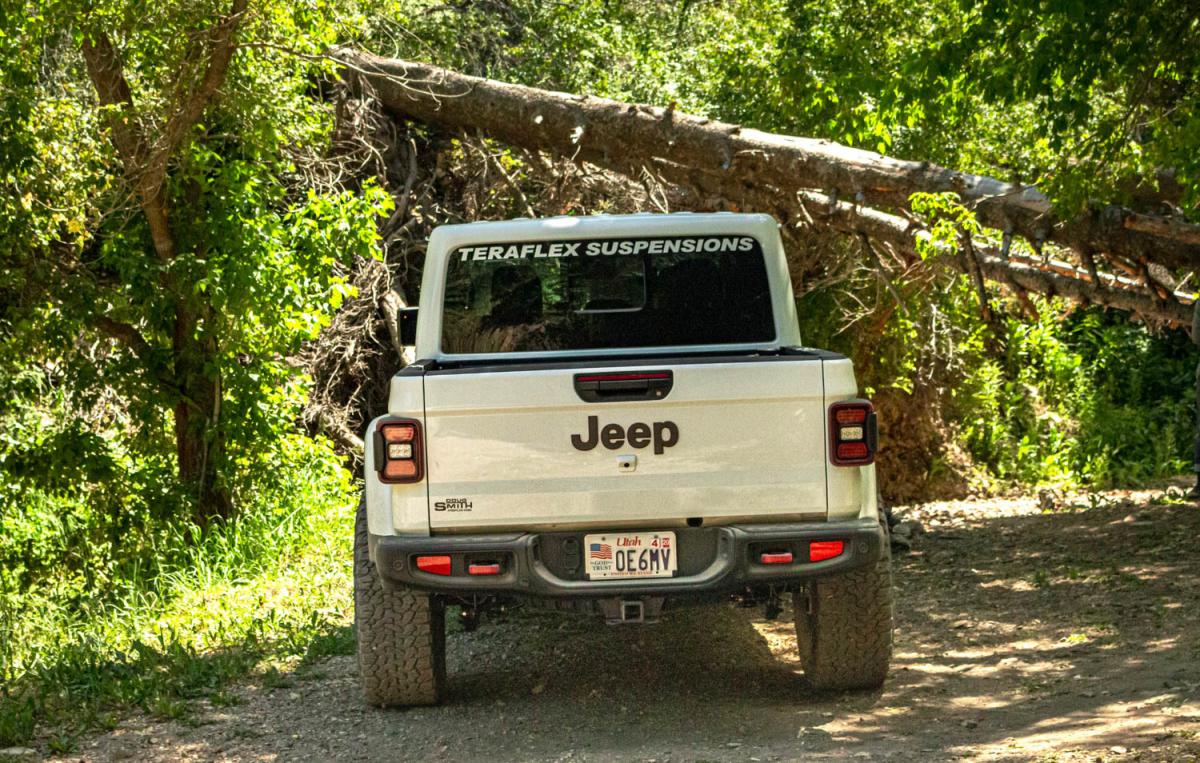 Is This the Most Versatile Body-On-Frame Jeep?

After a 27-year hiatus, Jeep has finally given us an all-new pickup! TeraFlex already has a pair of 2020 Jeep Gladiator pickups in our R&D (research and development) fleet: A Gladiator Rubicon and a Gladiator Sport. With a little persuasion, I was able to take the all-new 2020 JT Gladiator Rubicon for a weekend camping trip.

I cut out early from work on Friday to pick up my family. Earlier that morning, my wife, Lili, took a few tents and other supplies up the canyon in her 2014 Jeep Patriot to reserve a camping spot for the weekend. She made a second trip to haul eight bundles of firewood. When I got home, we loaded the remaining supplies and dogs into the Gladiator Rubicon and headed to South Willow Canyon about 35 miles west of the TeraFlex headquarters.

My wife noted how much smoother the Gladiator rode on the trail at 20–25 mph than her Patriot at 10 mph. Although many sections of the trail caused the Jeep pickup to bounce around a bit, the motions were smooth and controlled and never harsh.

The next morning, we decided the best way to avoid the heat of the day was to explore the adjacent canyons. After breakfast, we headed over to North Willow Canyon and Davenport Canyon since we had never been. North Willow proved to be much less forgiving than South Willow with larger rocks and deeper ruts along the trail. Although there were plenty of lesser crossovers and even some cars at the camping spots, I didn’t have to adjust my route along the path to avoid any obstacles due to the Gladiator’s ground clearance and solid axles. With its 137.3-inch wheelbase, the JT Gladiator rides smoother than the already comfortable JL Wrangler Unlimited with its 118.4-inch wheelbase.

Once we had traveled up the canyon above the last camping spot, the trail narrows, and the rocks and ruts get even more gnarly than before but nothing too extreme. A few times the Pentastar engine’s 260 lb-ft of torque combined with the eight-speed automatic’s low first gear caused the rear wheels to dig down through the rocks into the dirt below. Simply backing up and slightly changing the approach easily got us through. After a few of these events, I shifted into 4-High, and the JT Gladiator was able to glide over every obstacle. Apparently, there is such a thing as sending too much power to one axle. Keep in mind we didn’t bother to lock either differential or air down. Tire pressure was set at 29/30 psi front/rear, respectively.

When it came time to tear down camp, the Gladiator’s five-foot bed easily swallowed all the gear we had brought up (including the two early morning trips in the Patriot) as well as seven remaining bundles of firewood. Not only were we impressed with its cargo-carrying capability, but we really liked being able to throw all our “dirty” gear in the bed instead of bringing it inside the cab.

Once we recovered from camping, we took the Gladiator into Salt Lake for some dinner and shopping. Out on the pavement, the 285-hp Pentastar V-6 and eight-speed auto combo provided plenty of power to accelerate to freeway speeds (70–80 mph) before merging at the top of the onramp. Despite its 218-inch overall length, the Gladiator was easy to navigate and park in tight parking lots.

After spending a weekend both on- and off-road with the all-new 2020 Jeep Gladiator Rubicon, I have come to several conclusions: the JT Gladiator will make a great overland/camping and Prerunner vehicle for the off-roader as well as a great family vehicle, homeowner pickup, and date night vehicle. The one area where the new JT Gladiator will fall short of the JL Wrangler/Unlimited will be hardcore rock crawling where a shorter wheelbase and less rear overhand are a must.

My wife summed up our experience best:

“If I didn't already want a [real] Jeep; I love the Gladiator now!”

Even the dogs were excited for adventure when I first arrived at the house in the Gladiator Rubicon. Trucks and SUVs mean they get to go camping.