The store will not work correctly in the case when cookies are disabled.
Due to increased order volume and the impact of COVID-19, order fulfillment may be delayed. Please allow 3 – 5 days for in stock items to ship. We apologize for any inconvenience.
🌞 🌞 🌞 TeraFlex Summer Sale! 10% off on select products. 🌞 🌞 🌞

Jeeps 101: From the War-Era Willys MA/MB To The All-New JT Gladiator 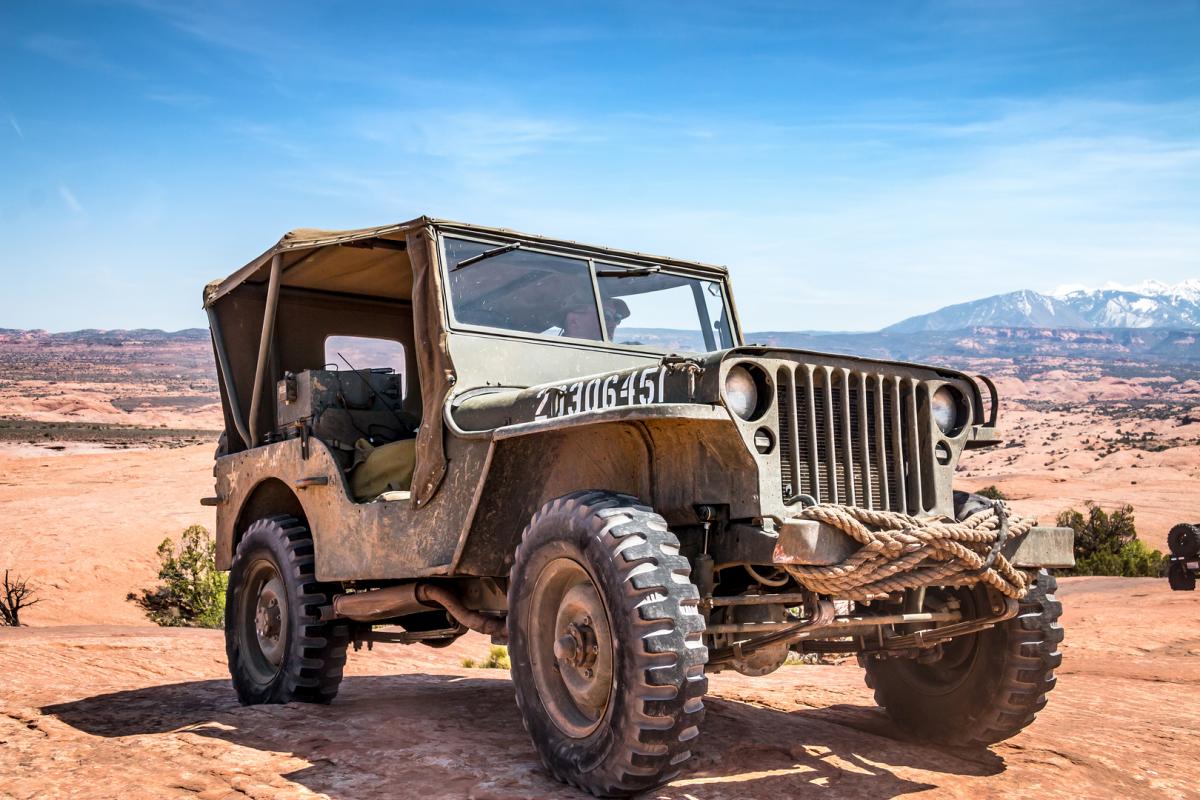 When the Jeep Wrangler TJ arrived for the 1997 model year sporting an all-new coil spring suspension in place of its predecessors’ leaf spring setup, few existing aftermarket companies were interested in offering parts for the new model. In fact, much of the Jeep community thought the new suspension setup marked the end of the iconic model.

With a large void in the aftermarket, Mark Falkner stepped up to the plate and created the world’s first lift-kit for the TJ Wrangler creating TeraFlex Suspensions in the process. Although TeraFlex focuses on the TJ, JK, and JL Wrangler/Unlimited, and JT Gladiator, Mark is no stranger to the off-road Jeep world. His father founded MEPCO (Military Equipment Parts COmpany) when Mark was just 2 years old. Ten years before starting TeraFlex, Mark bought MEPCO when his father retired.

Although the modern coil-sprung Wrangler/Unlimited and Gladiator models make up the bulk of TeraFlex Suspension’s business, it’s important to know the history of the Civilian Jeeps that arrived shortly after World War II. Here is a look at Jeep’s past.

The Jeep Wrangler story began more than 80 years ago when the U.S. military petitioned more than 100 automakers to build a new “light reconnaissance and command car” to replace its aging fleet of motorcycles and customized Ford Model T vehicles. An upgraded version of the Willys Quad military prototype entered service as the MA or "Military” model “A" alongside the Bantam BRC-40 and Ford Pygmy as the Ford GP in the fall of 1940.

To standardize production, The U.S. Army awarded WIllys the contract to build their design. While all three designs were similar, the soldiers preferred Willys' more powerful Go Devil engine. The Willys MB entered production in mid-1940 featuring design cues from the Ford and Bantam models. The new U.S. Army truck was instrumental in the U.S. Army's success in World War II. While the official origin of the Jeep name is uncertain, there are three plausible stories.

Origin of the Jeep Name Although the government chose the Willys-Overland MB design for the U.S. military’s new vehicle, the war effort required more production volume. Ford produced the GPW (G for government vehicle, P designated the 80" wheelbase, and W for the Willys engine design) during the war years. The letters GP were slurred to sound like “Jeepy.”

The second story is that the 4WD rig is named after the character Eugene the Jeep from the cartoon Popeye.

Jeep was also “used as casual slang in the Army for anything that was insignificant, awkward, or silly...[and] by army mechanics during World War I to refer to any new vehicle,” according to Steven J. Zaloga's book Jeeps 1941–45.

But anyone who owns a Jeep will tell you that it really is an acronym for “Just Empty Every Pocket” but we convince ourselves — and our significant other — that it means “Justify Every ExPense.”

In 1945, the Willys-Overland CJ-2A became the first model available for civilians and was dubbed the CJ or “Civilian Jeep.” Standard features included a 134-cu.-in. L-head Go-Devil I-4 engine, a T-90A 3-speed manual transmission, Spicer 18 transfer case, and a full-floating Dana 25 front axle and Dana 23-2 rear axle. The Willys-Overland CJ-3A gained a 1-piece windshield and a heavier rear axle. Both the military-spec and civilian models featured an 80” wheelbase and rode on a leaf spring suspension at both ends. With a new 134-cu.-in. Hurricane F-Head I-4 under the hood and optional 4-speed manual transmission, the Willys CJ-3B featured a taller front grille and hood. The Jeep CJ-7 arrived in 1976 riding on a 93.5” wheelbase — 10” longer than the CJ-5. Other differences included straight (rather than curved) rear door cutouts, a revised chassis with two parallel longitudinal main C-section rails, and a rear frame step out, which moved the springs and shocks closer to the outside of the body for better stability.

In addition to the standard 2-speed transfer case, the CJ-7 was offered with an available Quadra-Trac automatic all-wheel-drive system for the first time. Other firsts for the CJ-7 included an optional molded plastic hardtop (alongside the canvas top) and steel doors.

The success of the CJ-7 led the automaker to discontinue the CJ-5.

With its 103” wheelbase, the Jeep CJ-8 Scrambler is a long-wheelbase version of the CJ-7. Instead of the CJ’s traditional cargo area, the 2-seat CJ-8 Scrambler featured a long rear overhang and a small pickup box aft of the half-cab. As with the CJ-7, a soft-top or hardtop was offered. But unlike the CJ-7, the Scrambler wasn’t available with the V-8 engine or Quadra-Trac system. The automatic was only optional with 6-cylinder engines. The Jeep Wrangler YJ represented a major shift in the off-road-oriented compact 4WD market and bridged the gap between the classic Jeep CJ models and the modern Wrangler. Though it was just as capable as its predecessors, the automaker also began to add modern comforts to the all-new 1983 Jeep Wrangler.

Like the CJ models before it, the YJ Wrangler featured body-on-frame construction and solid axles suspended by leaf springs at both ends. Although its 93.4” wheelbase was similar to the CJ-7, the YJ rode on a wider track and wider leaf springs. New track bars, anti-roll bars, and less ground clearance improved handling and stability. The new YJ shared more mechanical bits with the Jeep Cherokee XJ than it did with the older CJ models. AMC engine options for the YJ include a 2.5-liter I-4, 4.0-liter I-6, or 4.2-liter I-6, while transmission options included 5-speed manuals or 3-speed automatics.

While the upright open cab connected it visually to the past, the YJ has several distinct styling elements. Instead of being upright, the top of the grille slants back toward the hood and the windshield is larger. The YJ is also the only generation to feature square headlights.

In late 1987, about a year after the 1987 YJ went on sale, Chrysler Corporation bought AMC creating the Jeep/Eagle Division. Though it shared its 93.4” wheelbase with the YJ, the new 1997 Jeep Wrangler TJ marked the beginning of the modern off-road Jeep. The leaf spring suspension was no more. In its place was an all-new Quadra Coil 4-link coil spring set up similar to the one used on the Jeep Grand Cherokee ZJ/WJ. Despite having more ground clearance and a more aggressive approach and departure angles than the YJ, the new suspension design significantly improved ride and handling.

The base 2.4-liter PowerTech I-4 was replaced by the 2.4-liter DOHC I-4 used in the Chrysler PT Cruiser. The 4.0-liter AMC PowerTech I-6 was optional. Transmission choices included either 5- and 6-speed manuals or 3- and 4-speed automatics depending on engine and model year.

Although it rode on a modern suspension, the TJ Wrangler retained many classic Jeep features such as the return of the round headlights, the fold-down front windshield, removable doors, and a standard sports bar. Options included a removable soft-top or a removable hardtop.

The TJ was the first Jeep Wrangler (or CJ) to feature driver and passenger-side airbags. This generation arrived for the 2007 model year in two versions: the standard 2-door JK Jeep Wrangler and the long-wheelbase 4-door JK Jeep Wrangler Unlimited. With its 20.6” longer wheelbase, (95.4” vs. 116”) the new Unlimited added enough length to add rear doors with three-across seating in the back. The cargo room also increased significantly.

The standard JK has a 44.3-degree approach angle and 40.4-degree departure angle, while the Rubicon JK with its 32” tires has a 25.4-degree breakover angle versus 22.6 degrees for the standard model. Despite its similar appearance to the outgoing JK, the all-new 2018 JL Wrangler/Unlimited gained substantial updates and upgrades. The wheelbase grows 1.4” for the 2-door and 2.4” for the 4-door now at 96.8” and 118.4”, respectively. The additional length enhances the rear-seat legroom. High-strength steel is used for the main body, while aluminum is used for the hood, doors, and windshield frame, the tailgate is magnesium, and the fenders are plastic. The new lightweight materials save up to 200 lbs. depending on the model and options.

The 3.6-liter Pentastar V-6 and a new 6-speed manual are standard, but the previous 5-speed auto has been replaced with a new 8-speed auto that improves both acceleration and fuel economy.

The standard Pentastar engine is joined by several all-new engines.

The first new engine, available on both body styles, is a turbocharged 2.0-liter DOHC I-4 with eTorque technology rated 270 hp and 295 lb-ft of torque that’s 15 hp less, but 35 lb-ft more than the Pentastar V-6.

The second engine option, which became available for the 2020 JL Unlimited only, is a revised version of the automaker’s 3.0-liter EcoDiesel V-6 first used in the 2014 Ram 1500 pickup. The engine is rated at 260 hp and 442 lb-ft. All three engines gain Engine Stop/Start (ESS).

Both engines are mated exclusively to the new 8-speed automatic.

The 2021 JL Wrangler Unlimited 4xe PHEV (plug-in hybrid electric vehicle) boasts a combined total of 375-hp and 470-lb-ft of torque and an estimated 50 MPGe (miles per gallon equivalent) and can travel up to 31 miles on only electric power. The 4xe combines a 270-hp/295-lb-ft turbocharged I-4 engine with a 44-hp/39 lb-ft eTorque Belt-Start Generator/Motor mounted to the front of the engine, and a 134-hp/181-lb-ft Integrated Transmission Traction Motor mounted in place of the torque converter of the 8-speed automatic transmission. A 400-volt, 17-kWh, 96-cell lithium-ion battery pack is mounted under the rear seat.

The JL Wrangler Unlimited Sahara model is available with a new Selec-Trac full-time 4x4 system with a 2-speed transfer case and 2.72:1 low-range gear ratio. In 4Auto the Sahara normally sends 100% of engine torque to the rear wheels, but the transfer case’s electronically controlled clutch pack can route up to 50% of the engine’s torque to the front wheels as needed.

While the Rubicon rides on heavy-duty wide Dana 44 front and rear axles, Sport, Sport S, and Sahara models ride on next-generation Dana 30 front and Dana 35 rear axles with a 3.45 rear axle ratio. A limited-slip differential is optional on the rear axle.

Other trims and special edition models have been offered as well. Loosely based on the 4-door JL Wrangler Unlimited, the new Jeep Gladiator JT pickup arrived in 2019 for the 2020 model year. The JT Gladiator uses the 3.6-liter Pentastar V-6 mated to the 8-speed auto. The 3.0-liter EcoDiesel V-6 is expected to arrive later. Trim levels include Sport, Sport S, Overland, Rubicon, and the late-arriving Mojave tuned for high-speed off-road driving.